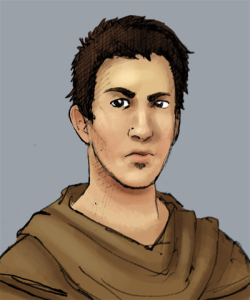 Nesim was born to merchant parents who fell ill and died when he was young, leaving him stranded far away from their family home. Unable to find his way back east, Nesim survived on the streets of Berdusk until being taken in by Leosin after trying to rob him on the Trade Road. He lived as a monk at Saint Fram’s Monastery for seven years before the Kult of the Dragon raid on Greenest.