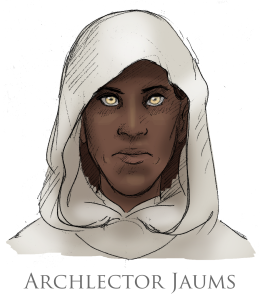 The Fey Knights are a group of elven warriors who have taken the Oath of the Ancients and sworn fealty to Kaer Iphas. Their mission is to protect and serve the high elven settlement and its interests as elite soldiers. They are led by Ser Bertilak and answer to the Archlector Jaums Arterius.

Bertilak– Leader of the Fey Knights. Wears flashy plate armor and an antlered helm that denotes her station.

Goladir – Holds membership in the Order of the Gauntlet as well as the Order of Sagittarius. Led the pilgrimage that took the PCs from Churaud to Kaer Iphas.

Erdhil– Works as a scholar and teacher in addition to his knightly duties. Approached Sylfea early on to report suspicion of dark dealings in the forest.

Elengor– Kareer soldier who rose to knighthood by her own merits. Met the PCs at the hidden valley of the Idunian tomb.